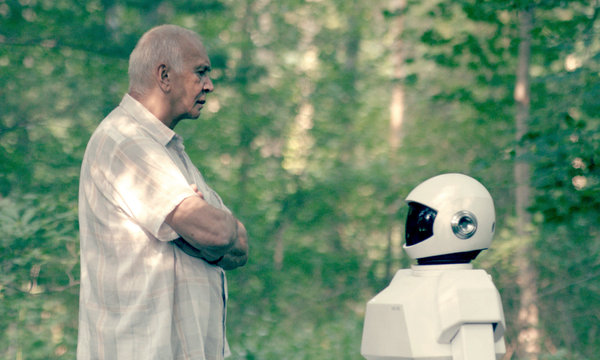 This post is the first of a monthly slot where the people I train and teach on a weekly basis will share their views and ideas on films and shows that touch on or directly address the various issues involved in ageing and being an older person.

Teresa Matus (our first “critic”) has been coming to my creative-dance class for quite a while and and I’ve been struck by her passion for dance since those very first classes.  Whether in class or by supporting dance artists by going to the theatre, Teresa beams with excitement for this art form.  Here are her thoughts on the recently released Robot and Frank, a 2012 American film directed by Jake Schreier and written by Christopher Ford. Set in the near future, it focuses on Frank, an aging jewel thief played by Frank Langella, whose son buys him a domestic robot.  Enjoy and over to Teresa…

I went to see this on a thursday afternoon and had the entire screen room to myself, which was a bit spooky!  However I loved the film.

Frank appears to be in great shape for his age physically, but his memory lapses are causing real concern to his grown-up son and daughter.  So his son brings him a robot, which is actually a futuristic care worker.  (I’m ordering one for myself and one for my mother NOW!!) At first Frank is furious and demands it is taken away and tries to find how to switch it off, but gradually as he sees the order that Robot brings to his life, cleaning, shopping, making him healthy meals and helping him shave etc, he grudgingly accepts the presence of this machine in his life.

Frank discovers by chance that the robot has not been programmed with an understanding of law as far as theft (ie Robot has no concept of right or wrong in this matter).  This revelation triggers Frank to see if he can train Robot to assist him in reviving his old profession as a cat burglar…  It works, as they at first steal a valuable book from the library (which is being stripped of all it’s books in this cyber-age), and then to steal some jewels from the local Yuppies.

It is the mental stimulus and joy that Frank gets from the intricate planning strategies, stake-outs and the resulting exhilaration of successfully pulling the job off, that is so revealing. This aging man who had been retreating into himself losing his mind slowly, finds he can still do things and the mental and physical activity gives him back his joie de vivre.

What struck me, was the parallel of the Library, no longer of any worth for what it holds within it, but merely kept as a shell in memoriam of what it once was, and the way elderly people are so often treated with condescension as benign, valueless entities,”old-timers”.

The story-line of the film simple, but the underlying themes are thought-provoking.

Although Frank’s past is probably morally reprehensible, he was a highly skilled Cat burglar, which somehow one has to respect, or at the very least he should be treated as a person, with skills and traits both good and bad.

There is sadness too, seeing how his dementia is taking away his memories of his family.

I think it is because it may be easier for us to connect with those outside of the family sometimes, that Frank comes to feel that Robot is his friend; his partner in crime and helpmate. Robot is not emotionally connected to Frank’s past, so Frank can feel valued for his skills without judgement. But of course Robot is just that, a machine, which Frank has to accept finally.

I’ll not tell you how the story ends, as I hope you will go see the film for yourselves. It is not one of those ‘amazing ‘ awe-inspiring experiences, but a quietly good story, which gets one thinking on how society treats the elderly and especially the value of stimulus in slowing the progress of dementia and helping to restore a sense of self-worth.

Any thoughts on the ideas you’ve just been reading?  Please share them with us in the comments section below.  We’d love to hear from you!

One Comment on “Can a Robot Get Us thinking About How We Age?”

In the UK we have a notion that we call the Law of Unintended consequences.

We also have a State School system in which History is taught to our children.

The History buffs have decided that British Children must study World War Two and its consequences. Quite possibly this is to ensure our children do not forget, remain vigilant, spot attempts & trends toward another similar undertaking. And true it was an appalling experience for the men and women on the front line bombed and shelled, shooting and being shot but not dieing immediately. The whole world was convulsed in this nightmare for seven or eight years. It is good to ensure that our children remember the sacrifices made and better, ensure they are not caught in the the negative rhetoric that leads to such convulsions.

There is however an unintended consequence.

My Father returned from the war having buried his identical twin brother in Simonstown Military Graveyard (South Africa). He returned, married my mother and I was born in 1948. I, am a historical figure. And so you are if you were born that year or earlier. We are expected to remember our past. In fact it is assumed by younger generations that we must remember all our past. Much of it is not worth remembering.

Besides the present has its matters of importance too, to me, to you too. Enjoy…..