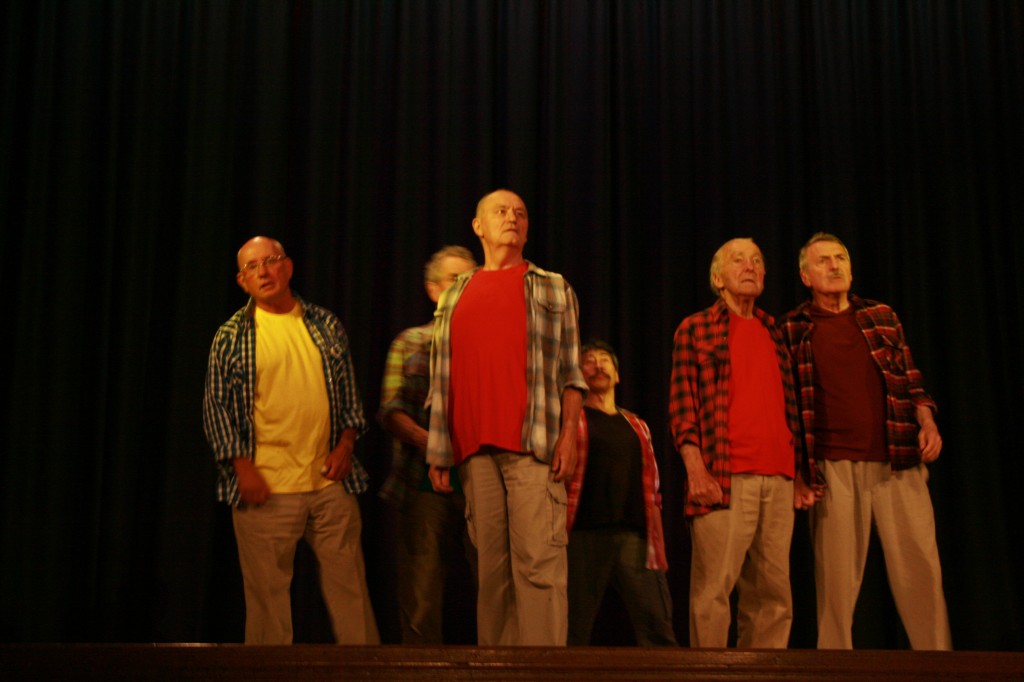 Working with the men of Sadler’s Wells’ Company of Elders to create the piece Man Alone was a fun but serious affair.  At the time I had noticed in general that the men in the company were having a tendency to “let the women go first” when it came to class and choreographies and this resulted in an invisibility of sorts when it came to the men.

I wanted to remove their invisibility cloak and have an opportunity to be centre stage and this really did the trick, both boosting their confidence but also shifting the dynamic of the company by engaging the men in a different way.  Part of the inspiration for the piece was this poem by member of the company, Richard Melville.

Man Stands alone
At the mature part of his time
Man thinks
Who is he?
Why is he?
What is he?
All things to all men-who said that?
But can he by sheer force of personality
Create a personality of force?
Or must he simply go on being him?
He returns to his beginnings
In my beginning is my end

Here, one of our other members Chris Morgan describes some of the ideas that were on his mind as we performed and toured;

“Years of working with older people in the community left me feeling weary and frustrated with the battle.  Passing legisilation that combats age discrimination is a painfully slow process.  Ageism remains embedded in our society, many people invoke old age before ever reaching it, thus conforming to society’s expectations.

On stage we can demonstrate what we are capable of, that is why I sing and dance.  The stage is the oldest form of communication and we are using it to inspire and empower older people everywhere.  We present a different image of ‘old’ people and deliver a positive message to the public!”

It is unusual to have the opportunity to work just with men on a dance piece so this was a privilege.  The video below is a rare recording of Man Alone in its entirety, as the piece is now usually performed as an extract with the George Baker section being centre of attention…